Edit: Late to the Party

Looks like I wasn’t the first one to come up with this idea. Some bright folks over on reddit have pointed out tmate, a fork of tmux purpose-built to facilitate precisely the same process described in this guide (and with far more sophisticated security measures, from the looks of it).

It comes with a lot of nifty features, like a web interface for you to view the shared session in your browser.

Unfortunately, it looks like the project has hardly been touched for almost two years. No reason it won’t get the job done, though, and it’ll save you loads of time over reading through this mess.

Traditionally, pair programming is done in person, with two engineers sitting side-by-side at the same computer — but I think I speak for all of us when I say that seeing other humans face-to-face isn’t the reason I got into this business.

And yet, if you’ve ever tried to arrange a remote pair programming session, you might have found your fondness for personal space outweighed by the debilitating rage of working (or observing someone else work) on a laggy interface hampered by a stuttering, unreliable connection.

Well, I don’t have a solution for network latency. What I do have is a remote pair programming setup using ssh and tmux, so that at the very least, you can suffer in the quiet dignity of a native terminal window.

At the time of this writing, the hottest tool for remote pairing appears to be Floobits, while the easiest is screenshare or remote desktop (e.g., ScreenHero). So why would you choose ssh + tmux over these guys?

On the other hand…

Let’s suppose Bojack and Todd want to pair together. They’re on the same local network, so their computers are discoverable at <hostname>.local. Bojack has already authorized Todd to log into his account over SSH, so all he has to do is start a new tmux session and wait for Todd to join:

Voilà! Now Bojack and Todd are attached to the same tmux session on Bojack’s computer (think remote desktop, but in the terminal).

So what’s wrong with this? 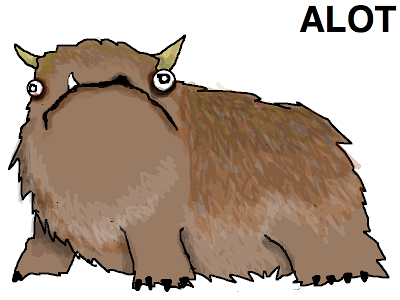 Todd now has access not only to Bojack’s computer, but to his user account. That means all his files, GPG keys, SSH keys, and more. Sure, Bojack and Todd are good friends, and Todd would never do anything to sabotage Bojack on purpose. But Todd’s really not the sharpest tool in the shed. What if after they finish pairing, Todd forgets he’s still logged in, sees a bunch of files he doesn’t recognize, thinks “I don’t need these,” and then rm -rfs them?

You may have noticed that we also totally glossed over how Bojack granted Todd login authorization in the first place.

Setting up this connection is easy and relatively secure because Bojack and Todd are on the same LAN — but that’s generally not the case for people who want to pair program remotely. To actually make this a remote solution, we have to set Bojack’s computer up to accept incoming connections over the Internet.

(Okay, so maybe there aren’t that many problems on its face, but fixing either of these things opens up a whole other can of worms.)

A Better Way, in Broad Strokes

Let’s go over the what and why before we get into the how.1

Except tmux isn’t a multi-user program by default (and for good reason — it’d be like su <user> without a password prompt). Which means now that he has his own account, Todd won’t be able to tmux attach to Bojack’s session anymore. Luckily, someone has already written a bash script called wemux to solve just this problem.

If we really don’t trust Todd, we can consign him to a read-only tmux session (think screenshare vs. remote desktop).

Bojack hasn’t set up his personal development machine to allow incoming connections from the Internet. That means there’s a firewall and a NAT standing between him and the vast, hostile wilderness, just as God intended.

These security mechanisms are the front gate to Horseman Manor, except we want to bypass them and leave it open so Todd can drive straight up to the door of the guest room (which he’s got the key for). Only, there’s a horde of robot burglars patrolling the streets, driving onto anyone’s property they can, scoping out all the different ways there are to get inside everyone’s houses.

So, Bojack has another idea. He owns a restaurant where there is no front gate. Anyone is free to drive onto the lot already (because it’s a business establishment that serves the public) — and besides, neither of them lives there, so security is not their problem. Every time Todd wants to come over, Bojack reserves a special loading bay in back of the restaurant where Todd can hop onto a shuttle bus and catch a ride back to the house.

This way, the manor stays behind a closed front gate (NAT) at all times. We don’t have to worry about what happens if Todd’s car (laptop) gets stolen with the keys to the guest house (SSH private key) inside: we’re only offering rides back to the house (reverse tunnel) an on an ad hoc basis, and if anything fishy happens, Todd can just let us know we need to change the locks.

And if we’re feeling extra paranoid, we can always board up the windows and fire that doorman that lets people in when they say the magic word.

Once we get all the configuration out of the way, here’s what setting up a remote pairing session will look like:

Now Bojack and Todd are in business. They’re attached to the same tmux session on Bojack’s computer again, but this time, they can do it from anywhere in the world, and there’s nothing Todd can do to screw things up on Bojack’s computer (without trying really, really hard).

Step by Step, This Time

I have my own public-facing SSH server (e.g., a VPS)

If you don’t have tmux already, get it.

In fact, get wemux and ngrok while you’re at it.

You should be able to run the following command without any errors:

Setting up sshd is beyond the scope of this guide, so if you’re stuck here, get Bingin’™. 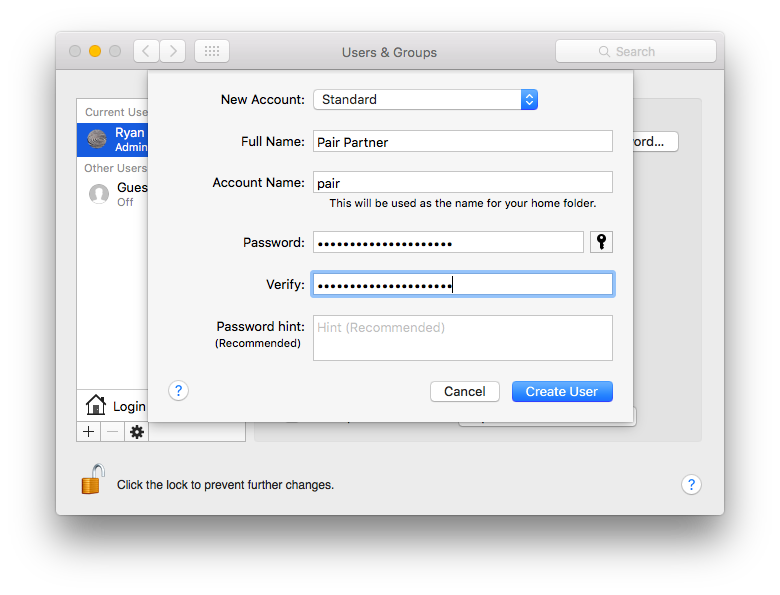 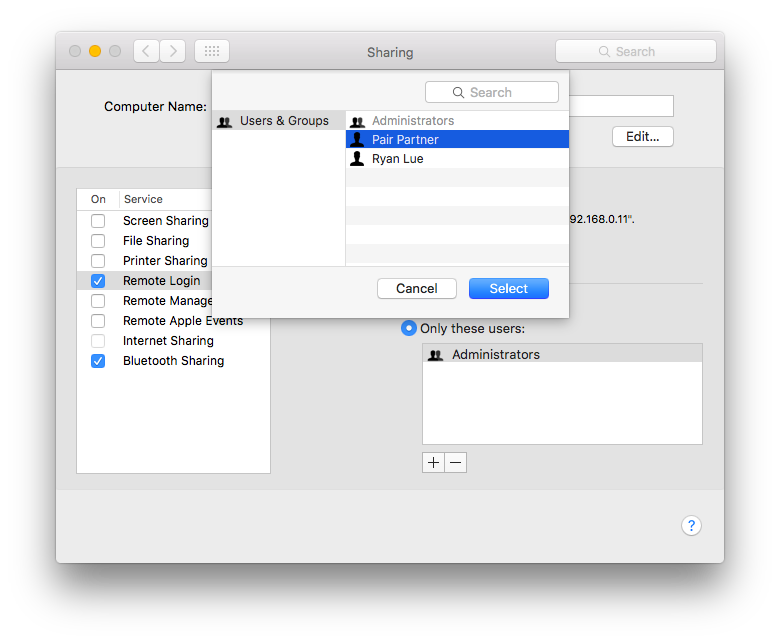 At this point, you should be able to log in as your new user:

If not, be sure to check any AllowUsers/DenyUsers rules in your sshd_config.

We want to make sure that no one can ssh into this user account but the people we made it for. The best way to do that is to disable password authentication and use public key authentication instead.

Now, you can authorize your pair programming partners by adding their SSH public keys to the authorized_keys file:

Try this with your own SSH public key. Then, verify that you can log in without a password:

To use wemux, first whitelist the users that are allowed to create new, multi-user tmux sessions (in this case, just you):2

So now the new user can log into our system to jump on a shared tmux session, which is great. But he can also do a lot of other things he doesn’t need to, like storing files and running programs, so we’re going to short circuit any attempts to do anything that’s not wemux.

We’re going to use a three-line script to drop the user straight into wemux and then terminate the session once it’s finished. The trick is making sure that it always (always always) runs when it’s supposed to. So where do we put it?

There are two scripts that bash can source on startup: .profile is for login shells, while .bashrc is for interactive, non-login shells. To illustrate:

As far as I know, there is no way to bypass .bashrc. So if we put the script there and then call .bashrc from within .profile, it should always run, no matter what.

I’ve been wrong before, though, so it wouldn’t hurt to go…

We could even take it a step further and amend the authorized_keys file from the previous step:

That means that even if someone got a hold of Todd’s SSH key without his knowing, and even if they knew when we were scheduled to pair, and even if they found a way to bypass .bashrc, they’d still be effectively locked out of the server. (See man sshd for more.)

Confirm that everything works as expected by trying to log in as pair over SSH:

In order to expose localhost to the public, we’ll set up port forwarding from a separate, public-facing SSH server (in other words, a reverse tunnel). Add the following rules to your remote server’s sshd_config:4

Then, restart the SSH daemon and set aside a port to use on the firewall:

Now, you should be able to receive incoming connections with the following command:

If that’s too much to remember, create an alias for this connection:

so that you can open that same tunnel with:

Confirm that it works by ssh-ing in from another terminal window:

We’ll be using ngrok to expose localhost to the public. ngrok is one of a number of freemium services offering ad hoc port forwarding from their public servers to users’ own devices (a.k.a. tunneling).

To forward SSH (port 22) over ngrok, you’ll need an account. Once you’re all set up with them, just open up a tunnel with their CLI utility:

With that, all the necessary machinery should be in place for a seamless pairing experience. Take it for a test drive as outlined above.

If you run into any problems, I’d love to hear about them.

If you’re in the same country, just use the dang telephone.

If you’re doing web development, use tunneling to expose your HTTP development server to the public. For instance, start the Rails server in one window:

and open a tunnel in another:

Now your development site will be available at http://elefantebistro.com:8080. (Just be sure to open the firewall on 8080 first!) something like http://b4067a18.ngrok.io. (Note that to tunnel SSH and HTTP connections simultaneously, you’ll need to dig into your ngrok configuration.)